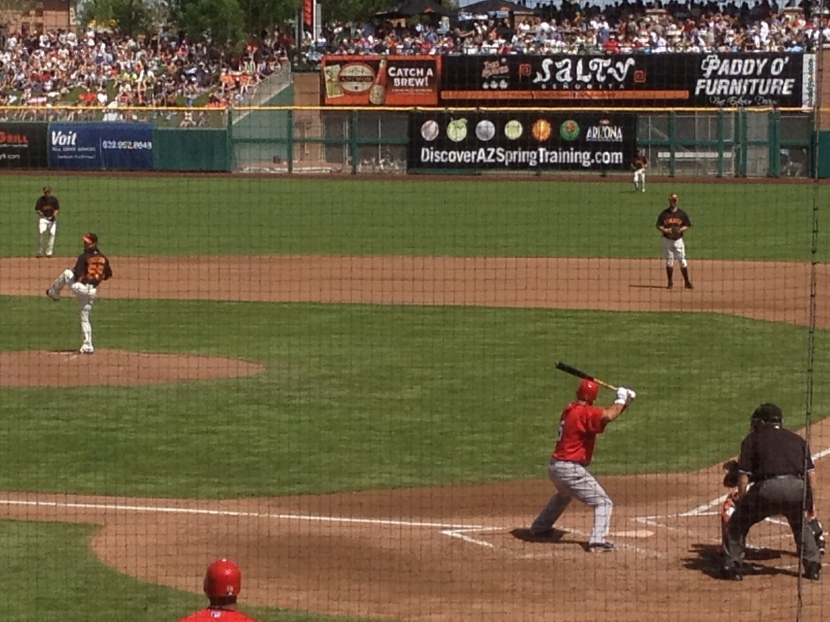 I haven’t seen a line-up yet for today so not sure if Mike Trout is playing or Pujols (they better be). But, Tim Lincecum is. And I will be there. The Freak is in the building. Keep checking back. I’m going to try to get technology to work for me today and blog live from the game. No promises though. After all it is technology.

#### Trout DNP. No surprise there. Pretty much the rest of the Angels were in the lineup versus Lincecum, including Pujols, Howie Kendrick, Mark Trumbo, Erik Aybar, etc all. Both teams appear to be serious contenders in their division, with pitching and depth being the keys.

This was my first look at Albert Pujols in person and I’ve gotta say, I came away quite impressed. Dude just looks smooth out there, on defense and at the plate. Still not sure why the STL decided to give up on him.

Speaking of fun to watch, is there anyone more entertaining than Pablo Sandoval? I have no idea what he’s doing up there, but Kung Fu Panda just goes up to the batters area and starts kicking dirt around. Strange. Can’t argue with the results though.

A sad side note from today’s game came off the bat (literally) of Mark Trumbo. He broke his bat which went flying into the stands, just above the Angels dugout, about 5 rows away from where I was sitting. The lady it hit was clearly knocked out cold. I’m hoping she’s ok. Play was stopped and she was taken out on a stretcher. She did walk to the stretcher so that is a good sign. I’m certain she is in the thoughts and prayers of young #44 this evening.

Holy Felix the Cat. Let’s hope he’s got 9 lives because he used one up today. 5IP, 8R, 7ER, 10H. And that’s against the White Sox. Imagine what will happen when he has to face a big league team. I kid. And Felix Hernandez will be just fine. Or you could always trade him to the D’Backs. I’m sure Kevin Towers is willing to give you Stephen Drew. He might even throw in Lyle Overbay.

In fact, why don’t the M’s send Ichiro and Montero over, too. Then the D’Backs would have 2 catchers named Montero. Imagine Ichiro in left, CY in center and J-Up in right. Anyway, back to reality.

So Hernandez will be fine. Ichrio is settling nicely into the 3 spot in the batting order, a move I really like. He’s hitting .400 in Spring ball, with 2 HR and 8 RBI. In fact, if you look at the Mariners likely Opening Day starting lineup (in Japan), there is only one glaring weakness. Chone Figgins. Or no leadoff hitter. Same problem.

After that, Ackley is solid, Ichiro will have a bounce back year, Smoak, Montero, Carp are all studs, Olivio has some pop, and Saunders is playing really well. Brendan Ryan… OK, so they have 2 holes, #1 and #9.

I also just realized the AL West is the fishing division. Well, it is the West Coast so that makes sense. We’ve got Mike Trout and Mike Carp. Hey whaddya’ know… they are both Mike’s too. They should open their own business. Mike’s Carp & Trout, Fishing Baseballs, Inc. Trademark it now, boys. Seattle’s Fish Market could have some competition. Or not. Either way.

Now it makes sense. They've been hiding him because he's booked for bobble head night in Cedar Rapids. I mean it's Cedar Rapids! And Kernel's At The Park. Can't miss it.

Mike Trout is not ready for the regular season. In fact, he’s not even ready for Spring Training. Going into the Spring, I was hoping he’d show off enough skills to get him onto the Angels roster for Opening Day. Alas, he did not play. At all. But, Ladies and Gentlemen, have no fear… We’ve had a Mike Trout sighting. He started the Angels v Royals game, going 0/3 with a walk and a K. I’ll get to see him play in person, next week at Scottsdale Stadium. (Provided he’s playing. At this point, I’m guessing he will be. Has a lot of ground to make up). Here we go, Angels fan going to yell at me about why he wasn’t playing. Speaking of Here We Go, anyone else see that Bud Light commercial? With the dog? Come on now, that is some funny ish.

The Machine, or El Hombre, as his friends like to call him, hit his 3rd Home Run of the Spring on Friday. Pujols is dispelling any rumors about his age or health being a factor. Dude can still ball and the Cardinals are going to regret letting him get away.

And just what the rest of MLB needs, another top notch, ace like pitcher for the Angels. Garrett Richards, the club’s top pitching prospect, is now 3-0 with an ERA of 2.00 in the Cactus League. Friday he went 4 shutout innings, striking out 6. Hmm, so let’s see, Jered Weaver, Dan Haren, C.J. Wilson, Ervin Santana, Garrett Richards. No thank you. I’d rather not have to face any of them.

Speaking of face, as in taking ground balls off of the face, can we all just admit the whole Mark Trumbo at 3rd base experiment is not going to work? And speaking of not working, Mike Trout anyone? Anyone? No? Yeah, I didn’t think so. God forbid he play. Not like anyone would want to see a top 5 prospect get on the field. Yes, that’s sarcasm. And yes I’m laying it on pretty thick.